Cloth woven by Jahanara based on this extant textile
Notes

I am making this to line the Drachenwald Royal Artisan Collar, so it can be pinned to costumes and so as not to chafe if worn next to the skin.This is based on a piece of damask I studied at the Clothworker's Centre London. I have simpliefied the design of this piece.The original is actually woven in samite (compound weft faced twill), but the design motif is quite similar to those used in damask. The original piece is dated to 600-900 AD and attributed to Byzantine or Egyptian weavers.

I studied the piece at the Clothworkers Centre in April 2015. When I decided to weave a backing for the Royal Artisan collar, I thought something of a simlarly simple design would suffice for a backing and used the same interlocking diamond motif, but replace the tresfoil in the center with a solid diamond. I also decided on solid lines to form the overall interlocking diamonds. These motifs carry throughout cloth and damask weaving until the modern day.
4" wide 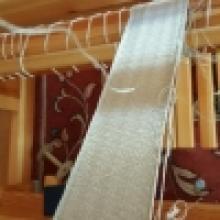