Warp Yarn:
30/2 Gemstone Silk Forest Green
Sett:
36epi
Picks:
36ppi
Weft yarn:
30/2 Gemstone Silk Light Green
Length on Loom:
7Yards
Width on Loom:
6 inches
Extant Textile Inspiration:
Syrian silk damask
Notes:
This belt is made of Silk yarn, from Halcyon yarn in colour 102 and . The weaving is sett at 36 epi. I wound a 6" warp, 7 yards long. I am weaving the belt using a 4 shaft broken twill threading. The damask will be created using 1/3 and 3/1 broken twill to create the difference between pattern and background blocks. The warp has a maximum of 58 pattern blocks. The pattern blocks have been placed in a point draw of 15 blocks with 2 full repeats.

I drafted the pattern one element, a lily flower, from a 8th C Syrian Damask and drafted it inside a circle because roundelmotifs are a very common element in Sasanian textile designs. After weaving my initial draft, I have also added some small motifs in the space between the circles as seems to have been done in other Sasanian textiles. During my tests, I decided the motifs between the roundels were too small and took them out of the design.  As I was weaving the test patterns, I started noticing the lily flower motif in many other textiles and Sasnian finds. This motif can also be found in Sasanian Itaglio.
234 ends wound for the warp


As I am testing drafts for the final design, I was able to draft a lily flower within a cirlce defined by a line and a circle defined by circles, called a pearl roundel. When I sat down to make my final decision, it was a difficult choice. I went through all the extant Sasanian textiles I have studied in person and in books. I made notes of several things, total number of textiles, what type of roundel is used in the motif, and main design elements in the motif. I studied 50 Sasanian textiles in all. Nearly half of the textiles studied contain a roundel motif. There are 5 which contain a roundel defined with an outline. Ther are 5 that have pearl roundels. Overall 9 of the textiles have floral motifs. 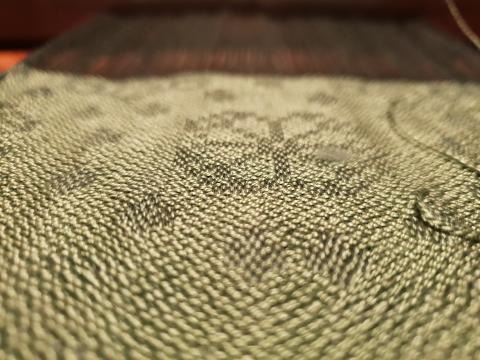 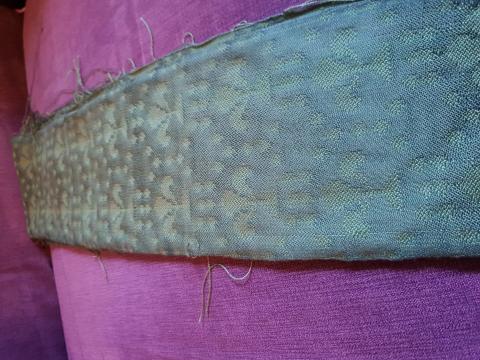